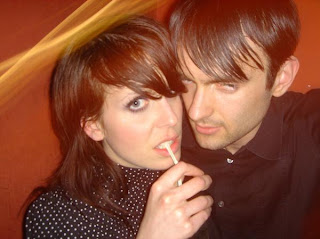 Is there anything more disheartening to a music geek than feeling hideously out of touch? That's how I felt when I discovered Sublight signees Lynx and Ram. Not only is it the kind of new school punky-electro I feel like I should have been up on, they're a local Vancouver act. So you know, I feel like an idiot for not knowing about them. At any rate, their debut record The System's On And It's Flashing Red came out a few weeks ago, and features a sound somewhere in the neighbourhood of recent Adult., with the seduction turned way the hell up and the drums set to 'spastic'. Some tracks like the sublime 'Our Bodies are Real' would only need slight punching up in remix form for them to really work in a club setting. Seriously, considering how unimpressive 2007 has been so far, this might be my favorite new act to put out a record. You can order it direct from Sublight. Updates if I get to see them live, which isn't that much of a stretch is it? I'm still with it!

Lynx and Ram "Our Bodies are Real"

Also, peep the tunes by member Julian Fane, who apparently has a record of IDM/Shoegaze coming out on Planet Mu.
Posted by alex at 11:00 PM

Nice! And local no less!

Thanks for the recommendation, Alex! After listening to the track you posted I found the album on eMusic and it's great. If they have a show soon let me know and I will check it out with you.