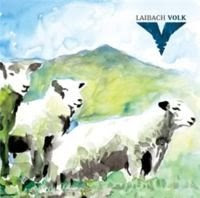 Laibach is by nature an incredibly political musical entity. When the foundations of your art are the confluence of totalitarian imagery and pop music, it's impossible to not have pretty much everything you do picked apart and analyzed, searching for a straightforward interpretation which may not even be there, a straightforward meaning which arguably can't exist at all. The strength of Laibach as a group has always been in their acceptance of the lack of easy answers in their own work, and in politically charged art and music in general. The eternal question that has always haunted them, the "are they or aren't they fascists themselves" question misses the point by a wide margin. It's the ambiguity that matters, a fact that the band awknowledges in their refusal to address it except with more questions (ie, vocalist Milan's oft repeated declaration "We are fascists as much as Hitler was a painter", a statement only an idiot would try to draw a literal answer from). Which brings us to 2006's "Volk" another in the band's series of concept records*, this LP finds our venerable satirists collaborating with Slovenian group Silence on a series of songs based on national anthems. The lyrics for each track address some social or historical aspect of the nation, while the arrangements twist the typical bombast and *ahem* anthemic qualities to be found in national music into something much more sinister. It's a natural fit, after all there isn't a piece of music simultaneously populist and political than a national anthem and that fact provides fertile ground for commentary on issues of national identity. On "Volk" the commentary often takes a more laid-back approach, "Anglia" is a light trip-hop style piece which skewers the arrogance of the English empire even in decline, while "Vaticanae" is almost reverent in it's simple Organ and vocal fuelled approach. There is confrontational work here however, not surprisingly on "Yisra’el" which includes within it verses from Palestinian national songs and "Francia" which criticizes France's hard-headed policies in dealing with civil unrest. It's fascinating to listen to both from the musical angle where the pomp of the music is frequently sent over the top as with "Nippon", or alternately stripped of extraneous meaning and turned into simple pleas and statements, as with "Slovania". Simultaneously, this may be the most obvious and most inscrutable piece of work from the latter era of the band's catalogue, driving home the point that Laibach is never about answers, but about posing questions, which in turn are answers in and of themselves.

*Can Laibach not make a concept record? Discuss.
Posted by alex at 1:13 PM