"Please rise for the deconstruction of our national anthem." 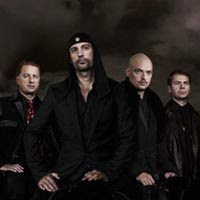 Yesterday's post by Alex on the new Laibach record got me thinking about the specfics of why Laibach's program of political satire works so well. To start with a quick nit-pick: I wouldn't say that Laibach's aesthetic is rooted in fascist imagery and music so much as it is rooted in totalitarian tropes. There's a black political humour that only comes from having one's tiny eastern European nation repeatedly steamrolled by harsh regimes from east and west, from right and left.

Anyhow, to my mind, it's pithy responses like "we are fascists as much as Hitler was a painter" that confirm Laibach as brilliant satirists. Truly committed conceptual artists (like, say, Andy Kaufman) never give the gambit away, because satire, unlike many "lower" forms of humour, requires some knowledgeable familiarity and conscious engagement with the material being satirized (as well as the formal elements of that satirization) on the part of the audience. On a side note, this is why I'd never be gutsy enough to say that any material of Laibach's wasn't conceptual. A song that they played at their last Vancouver concert sounded like a typically oontzy track in the "WAT" style until a friend from the former Yugoslavia approached me, laughing and explaining that the lyrics were from a folk song sung more than a century ago by Serbs as they were crossing a particular river, preparing to kill Croats. Or possibly vice versa. One way or the other, I didn't get the reference, nor why it would incite laughter per se. In short, my friend had the cultural language required to enter into the satire, unlike myself.

Confusion is Laibach's bread and butter: they bank on it. It's because they only muddy waters further when asked to clarify (at least for that AMG goober) that they are of such a higher calibre than all of those neo-folk ponces who run around wearing the runes and emblems of other cultures without any regard for their connotation and then explode into "defenceless artist" histrionics when anyone questions them. Blah, I don't want to get into all this again.

A point more salient to "Volk" - I think it's fair to say that their project on this record is a complete inversion of one of their most tried and true schticks: their remakes of pop songs which transform often trite original material into frighteningly epic anthems. There are a couple of interesting theories as to the nature of their intent in turning a goofy, touchy-feely song like "I've Got A Feeling" into Nuremburg rally call-and-response, or a song as lazy and crappy as "Live is Life" into a towering monument of glory (but to what?): they could be simply pointing out that aesthetics are substance, that form trumps whatever simple and base content these songs started with, or, and this is what I think makes those covers so compelling, they could be only drawing out and making explicit themes and possible readings of seemingly innocuous pop music that we'd never otherwise see - the supremacy of will, emotion and self within the tiny, insulated perfect world of the love song. We all take it as an indication of his insanity that Charles Manson heard personal apocalyptic messages in the white album (and rightfully so), but it's impossible to approach any of the songs on "Let It Be" from the same position of naivitee once you've heard what they "mean" within the context of Laibach's reinterpretation (with the possible exception of "Across The Universe"). To paraphrase Nietzsche, if you gaze for long into a spinning 45, the 45 gazes also into you.

What does all of this have to do with "Volk"? Well, the genre they're taking as their subject, national anthems, couldn't on the surface be any more different than the pop songs they've repurposed in the past (although, as I've tried to point out, surfaces are quite deceiving when it comes to Laibach). Instead of "sabotaging" the pop song by introducing questions of nationalism, power and politics that are normally anathema to pop, in "Volk" Laibach are creating space for commentary and criticism within a form that is explicitly meant for opposite purposes: namely the unquestionable celebration of nationalism and power. If the isolated would-be dictator can find inspiration in Top 40 dross, then so can the cultural critic, the anarchist and the dissident find fertile ground in the chest-pounding, anti-thought of the jingoistic anthem.
Posted by Contrasoma at 12:17 PM